Very few movies that are always lead the people like wanting for more as a perfect sequel. Among those fantastic movies with sequels, we could see a special series which is liked by all section of the people for more than two decades. Yes, we are talking about one of the best movies that are ever producing from Disney a decade back. Now, the last three films done by Lucas films where people started to feel these recent three films since 2015 provides a lot with a more engaging factor.

The force awakens released in 2015 and stepped into a billion mark of box office collection worldwide. So, the hype for other sequels has been grown and leads to box office success commercially. Apart from movies, Lucasfilm was also started to produce the games to keep the people’s momentum for all the time about star wars. It is the main reason that star wars have become more popular for its amazing tasks and visual effects while playing the games. Those games were also played by many where you can search to download in Google Play. 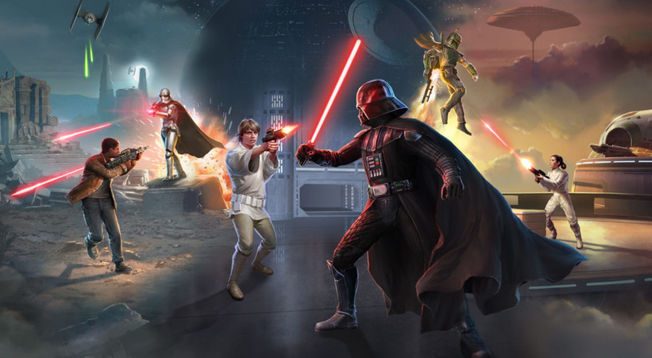 After the fantastic sequels of star wars and games, it is the time to expect something amazing from star wars team. If you like to play games on your mobile, then this could be possibly the best chance for you to utilize it. We all know that the recent mobile games of star wars take you to another world. Finally, another brand new game is getting ready to satisfy a lot more than you expected. This brand new game is called as “Star Wars: Rivals” which is really hyping the people. We can also expect something unique from this game where everyone easily adapts to this game and plays it interestingly.

When it comes to this game, it is being marketed by the team as a first real-time Star Wars action shooter game. This is something unique that you can expect from this upcoming mobile game where previous installment games do not have this effect. Now, the expectations have really touched the sky high and madly waiting for the launch to happen soon.

What is all about?

This game has the gameplay which gets its stand as action based that mainly focusing on PvP battles. These are the main things that grab the attention of game lover’s interest. The game is set at the various planets setup like the death star, Bespin, Jakku, and Sharif. Also, the players can join the group and play as per their interest. By following this game, you can bring some interesting characters that you have admired from previous star wars like Chewie, Fin, Luke, Han and more.

Apart from interesting characters, there will some of the options like attacking the opponents, changing the locations and it is also easy for the players to swap the heroes during the battle. It is also one of the leading solid reasons that you can expect to play from this fantastic rival game. However, the official date of launch is yet to announce, but you can register for this game on Google Play.

Fans of Star wars who all are excited about this game to download can make their registration and get a chance of accessing elite fighters in black armor and Death Troopers. It is the game which highly going to support cross-platform and leads the players to have some great battles. All you just need to wait for the official launch to play with your friends.

How To Install Android P Beta on...

How To Install TWRP Custom Recovery on...